Book review: This Side of Paradise 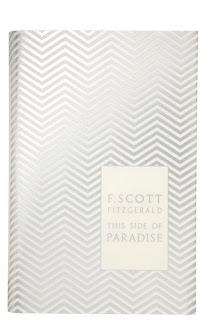 Late last year, for reasons that have much to do with the fact that they were all given beautiful new designs by the good people at Penguin (the image to the right gives some idea, but doesn't really convey the shiny metallic nature of the dustjacket), I purchased a complete set of F. Scott Fitzgerald's books: four novels, one unfinished one, and a collection of his short stories. At that point, a many-years-ago reading of The Great Gatsby was the extent of my Fitzgerald-readership, so I thought I would read them all, in order, and briefly review them. I've been working through the short stories (it is a 600-page book), and yesterday evening I finished his first published novel, 1920's This Side of Paradise.

In many ways, This Side of Paradise is a typical first novel. According to the introduction (which I skimmed afterwards - I hate reading these first, mostly because they tend to assume a familiarity with the work), it does contain some directly autobiographical themes, but I probably could have guessed that anyway. Amory Blaine is the only son of a fairly wealthy family: his father is background at best, as mother and son essentially ignore him, moving around the world for the first few years of Amory's life, inhabiting a world of quiet privilege and ad-hoc education. After his mother takes ill, Amory returns to the US, lives with an aunt & uncle, and begins his formal education at an exclusive boarding school. Self-centred (& a self-proclaimed genius), he remains unpopular for several years, before finding other like-minded scholars to befriend. He also comes into a close, substitute-father relationship with a priest, Monsignor Darcy. We follow Amory through his school and then university (at Princeton) days, and on into the war and the workforce (advertising, although he consistently half-tries to write poems and stories), dropping in on his conversations with friends, classmates, teachers, girls and Darcy.
Amory Blaine is not a particularly likeable character - which is reflected in how most other characters relate to him as well. Inherently snobby, solipsistic and self-dramatising, his intelligence is referred to, rather than seen. He has several love-affairs, all of which peter out for one reason or another, and few of his friendships remain strong for long - tending, instead, to be brief, all-consuming and then pushed aside for the next great influence (Monsignor Darcy remains his longest-lasting relationship).
While it is very much an example of a younger writer finding his feet,This Side of Paradise is nonetheless an intriguing start to Fitzgerald's career. He conveys Amory's world perfectly (possibly because it was also his own), keeps the book moving at a steady pace despite the lack of a particularly dominant central plot, and the prose falls with the casual elegance which would come to define Fitzgerald's style as a whole. He also doesn't condemn Amory too harshly for his failings, instead recording the follies of youth with a sympathetic touch. I knew little about This Side of Paradise when I started it, but it has made me look forward to working through Fitzgerald's remaining three & a half novels.
Posted by jb at 9:18 AM No comments:

(So, as it turns out, starting a new series on my blog a week before Christmas was a bad idea. But I'll try to regain some momentum by finishing off my little reviews of albums from 2010 I liked, and then get back into some book reviews and other stuff...) 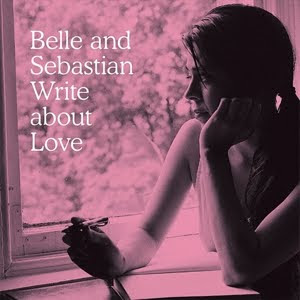 Like Sufjan Stevens, Belle & Sebastian had gone several years without releasing an album by 2010. Also like Stevens, there had been diversions along the way, most notably 2009's God Help the Girl album of songs written by bandleader Stuart Murdoch, and featuring most of the group (albeit with vocal duties handled by outsiders), as well as the 2008 release of The BBC Sessions. So it may not have seemed like it, but by the release of Write About Love, four and half years had passed since the last studio album by Belle & Sebastian - by far their longest break (and approximately as long as the break between posts on this humble blog...).

Unlike The Age of Adz, however, Write About Love does not see B&S breaking much new ground - think of it more as a refinement of the last few albums, with some influence from their earlier period as well. (Bluffer's guide to B&S's musical evolution: first two albums & associated eps were quiet, subdued indie pop; the next few years saw increasing orchestration and variety, but within a largely similar sonic framework; and from 2004 onwards a distinct '70s pop influence started to dominate proceedings.)

The album opens with Sarah Martin's 'I Didn't See It Coming', the first time one of the band's non-Murdoch members has been handed opening-track duties. And 'I Didn't See It Coming' is easily Martin's best song to date - a gorgeous melody, and wonderful vocals from her & Murdoch. 'Come On Sister' is similarly upbeat, and points to the album being similar in feel to its predecessor 'The Life Pursuit'. Track three, 'Calculating Bimbo', quietens things down, however, and also provides this album's first character-sketch-as-lyric song (a speciality of Murdoch's).

My favourite track off Write About Love (& one of my favourites by anyone in 2010) is up next: 'I Want The World To Stop'. It's an unashamedly pop song, with Murdoch's vocals, superbly supported by some of the others, atop the band firing on all cylinders. Unfortunately, it's followed by the underwhelming Norah Jones duet, 'Little Lou, Ugly Jack, Prophet John'. While Murdoch's & Jones's voices play well off each other, and the production is as lush as B&S will ever provide, it definitely feels like a Norah Jones song, not her on a B&S song. An interesting diversion, yes, but not much more than that.

The second half of the album kicks off with a bang with the title track, as catchy a pop ditty as you're likely to hear. Guest vocalist on this track Carey Mulligan chips in behind Murdoch, subtly undermining him:

I know the way
(So you know the way...)
Get on your skinny knees and pray
(Maybe not today)

Guitarist Stevie Jackson's lone songwriting contributing to Write About Love is 'I'm Not Living in the Real World', and it shares the off-kilter pop feel of many of his songs. Two quiet songs follow, 'The Ghost of Rockschool' and 'Read the Blessed Pages'. Both are pleasant without being particularly memorable (the latter sounds a little as if it is about former bandmember/Murdoch ex- Isobel Campbell - but that might not be accurate or fair). If I had a criticism to make of modern Belle & Sebastian, it's that the slower songs seem to have lost their bite - while slow, quiet songs on the band's first few albums tended to be some of the highlights, these two (along with 'Calculating Bimbo' & 'Little Lou...') are a little too '70s radio pop for me. A decade ago, who could have imagined that the peaks on the new Belle & Sebastian album would be soul-inflected pop songs that you could dance to, and the hushed ballads would feel out of place? That's testament to the band's growth, of course, but it also feels odd to be underwhelmed by the quiet tracks here.

Luckily, the last two songs restore some of the tempo: Martin's 'I Can See Your Future' may not stack up to 'I Didn't See It Coming', but it marks her continuing development as a songwriter, and 'Sunday's Pretty Icons' sounds like a quintessential B&S album closer - upbeat, a little optimistic, and eminently hummable. (Itunes bonus track 'Blue Eyes of a Millionaire' is also worth springing for, being a simple & sparse but lovely slice of acoustic guitar-driven pop.)

Write About Love does not mark a huge leap forward for B&S, as, say, Dear Catastrophe Waitress did. But it's a concise, punchy albums with at least three songs ('I Didn't See It Coming', 'I Want the World to Stop', 'Write About Love') that stand amongst the band's best, and hopefully also signals their return to regular album-making & touring...