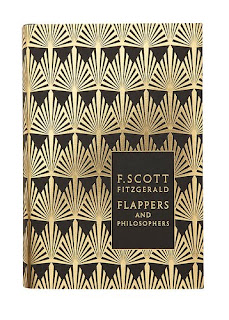 Like almost all writers of fiction in the first half of the twentieth century (especially American ones), F. Scott Fitzgerald filled his time between novels with short stories, often publishing at least a handful each year. Early 20C USA was, in many ways, the golden era of the short story, with many magazines publishing them to a wide audience (radio & then tv, of course, would chip away at that before long). And current wisdom holds that nobody reads short stories anymore ('why bother learning new characters every 20 pages?' being the common complaint), although personally I love a good short story as much as I love a good novel - which is to say, a whole damn lot.

This collection contains most - but, frustratingly, not all - of Fitzgerald's short stories, published over a twenty-year span. And while Fitzgerald is probably best known for The Great Gatsby & Tender is the Night, several of his short works also rank amongst the best-known short stories in the English language.

The early stories (this collection is more or less chronological) are rightfully remembered as classics of their era: his second book of stories is even called Tales From the Jazz Age. Most of these stories have young protagonists seeking to find their place in the world, and while in some ways they seem like period pieces, many of the themes here are timeless (social climbers, friendship, unsatisfying marriages). The last two in the section are amongst the most famous: 'The Curious Case of Benjamin Button' (which bears almost no resemblance to the movie, other than the central conceit of a baby being born as an old man and getting younger through time) and 'The Diamond as Big as the Ritz', a fantastic (in both senses) story of fabulous wealth.

The middle section (stories from the mid-1920s to the mid-'30s) shows both writer and characters maturing. Most of the characters are now young parents, and a sense of regret or disappointment with life does pervade many of the stories. During this period - when he also published his two most-famous novels - was Fitzgerald's peak as an author, and even more so than elsewhere in this book, the prose shines here.

Flappers and Philosophers concludes with a selection of Fitzgerald's later stories, including the Pat Hobby cycle (18 stories, just over 100 pages). Hobby is a perennially-49-year-old screenwriter in Hollywood, whose glory years were a long time ago and never that glorious anyway. Each story covers a new chance for him, although it usually just ends up being a fresh chance for him to embarrass himself. Living on short contracts (three weeks is about the standard), Hobby combines desperation with an almost astonishing lack of motivation or capacity for actual ideas or work.

At nearly 650 pages, and containing 45 stories, Flappers and Philosophers is a pretty immense collection (the two longest stories are in the 40-50pp range). For that reason, it might not be an ideal introduction to Fitzgerald, yet if you can get past that, the stories contained within are, almost without exception, wonderful. Aside from his ever-enjoyable writing, Fitzgerald demonstrates why short stories can be as, or even more, satisfying than novels: fully realised characters, subtly played-out themes, and the ready ability to mix a variety of moods, styles and ideas across a book.

Next on my ongoing trip through Fitzgerald's works: I return to 'The Great American Novel', The Great Gatsby.
Posted by jb at 9:37 AM 1 comment: 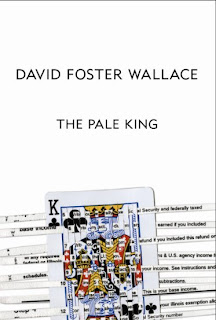 One Monday morning in September 2008, I got to my desk in Parliament House, turned on my computer and began my morning, as i usually did, by reading the news on various websites. This particular morning, however, had a pall cast over it. I read that David Foster Wallace, one of my favourite writers, had died the previous Friday evening. After a decades-long struggle (or series of struggles) with depression, with his medication no longer working, he hanged himself.

Reading this, I felt as if I'd been punched in the stomach. Not only had Wallace been one of my favourite writers of novels, stories and non-fiction, his style encourages feelings of intimacy. Without ever having met him, I felt like I knew more about his mind than I do about those of people I've known for years. (A slightly haunting coincidence is that on that same Friday afternoon, Eastern Australia time, I was listening to him read one of his essays on audiobook as I travelled to Sydney from Canberra.) This was not an uncommon reaction, I was to learn as I read comments around the internet over the next few days and weeks.
Wallace's second novel, and most famous book, Infinite Jest, was published in 1996. Since then, he had released two books of short stories, two collections of essays and non-fiction, and a book on mathematics. His third novel, parts of which had been excerpted over the previous few years in various journals and magazines, was approaching completion at the time of his death. It has now been released, under the care of his long-time editor, in conjunction with his wife and his agent, as The Pale King.
Like Infinite Jest, The Pale King revolves around multiple characters, but the effect here, despite the clearly unfinished nature of the novel, is in fact less fragmentary than is Infinite Jest. All of The Pale King's characters work for the IRS, at the Peoria, Illinois Regional Examination Center. The first few chapters will likely throw many readers off, as we are introduced to some of the cast as they are traveling to the Center, some as children, some as young adults. At this point, none are connected in any way we can see. Some chapters are short, some are long. They are written in noticeably different styles, and the idea of there being a main character is thoroughly dismissed. 70-something pages in, we get an Author's Foreword, written by The Pale King's putative author, one David Foster Wallace, ex-IRS employee.
There's no way to hide that The Pale King is an unfinished novel (even by Wallace's standards - Infinite Jest famously ends on a moderately ambiguous note, some 1100 pages after it began, and his debut novel, The Broom of the System, actually ends mid-sentence). Yet the fragmentary, non-linear and distinctly plot-light The Pale King is nonetheless a satisfying read. Even had he finished it, Wallace would almost certainly have not tied together the various mini-stories or character (semi-) arcs anyway: it's really best seen as a collection of character pieces and interconnected short stories. It's also, as I am contractually obliged to mention in this review, as every other review has/will, a novel about the boredom and mundanity of working life, and the toll that can have on a person. Wallace was very specific that this book would not culminate in a big action set-piece: as one of his notes (included at the back of the book) indicates, he wanted to make The Pale King about: "Realism, monotony. Plot a series of set-ups for stuff happening, but nothing actually happens".
As mentioned above, the different styles of different chapters allows Wallace to unleash the greatest weapon he has in his pretty formidable collection of writing skills: his peerless talent as a writer of monologues (or occasionally dialogues) (see: the Brief Interviews With Hideous Men series from the story collection of the same name, or Oblivion's title story). Many of the chapters consist of various characters monologuing for various reasons (interviews for a documentary, lengthy Friday-night-at-the-pub life story tellings). Many of these are hilarious, revealing or otherwise entertaining. Indeed, I cannot stress enough just how enjoyable The Pale King is, containing as it does long stretches of David Foster Wallace at the top of his game. And David Foster Wallace at the top of his game is a pleasure matched by few other authors in my reading life.
I guess the final question is whether 'new' readers of Wallace will find The Pale King enjoyable. It's actually a difficult question: as I've noted, it's a remarkably accessible book (with the proviso that if you value plot above all else, you'll find little here to sink your teeth into), yet at the same time I feel strange recommending it to Wallace neophytes. The two collections of non-fiction are probably the best place to start, but I would also recommend his last book of short stories, Oblivion, as being the best taster for his fiction style, which in general is much more formally difficult than are his essays. It's also a good representation of his style in The Pale King - no surprise, since they at least somewhat overlapped temporally. It is, of course, a tragedy on multiple levels that The Pale King will be the last novel we can read from David Foster Wallace. But for me at least, that feeling is countered by the great joy I felt in reading it. The world is a tiny bit sadder for no longer having David Foster Wallace in it, but it is also a little bit better for having The Pale King.
Posted by jb at 11:15 PM 2 comments: