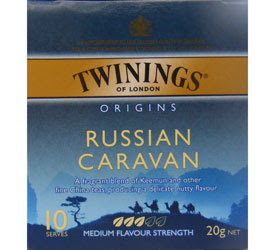 So, I thought it might be fun to expand the world of Joel's Blog #1, featuring regular reviews of different sorts of tea in addition to my book reviews & other such junk. I can't remember why I thought this might be a good idea, but here we are. As a dedicated tea drinker*, and appreciator of many different types of tea, I'll try to cover a range - but must admit that I have a strong bias towards black teas, so you won't see too many green/herbal teas here. (At present, I have seven varieties of tea at home, with an additional one in the office, so those will provide a start, and by the time I get through those, I'll have picked up some more to review.)

Leading off is the somewhat-polarising Russian Caravan tea, here represented by the Twinings teabag version (they also do a leaf-tea pack). I first tried Russian Caravan back in 2004, when the parents of my then-girlfriend were given a sampler box of different tea varieties, and found that nobody wanted the Russian Caravan. So I decided to try it. It made something of an impression, although I don't think I drank it again until several years later at High Tea at the (Brisbane) Stamford, when I somewhat foolishly ordered a whole pot of it (in fairness: when they serve all-you-can-drink tea, you don't stick with the thing you've got at home). The rest of my table - none of whom were tea-drinkers - found the aroma distinctly disgusting (an opinion they choose not to keep to themselves). One of my tablemates, who has since become my wife, subsequently refused to be present while Russian Caravan tea was made or consumed, and only came around after I introduced her to Lapsang Souchong, a tea so, um, noticeable in its aroma (& taste, for that matter) that even through several layers of packaging it can make dogs weep and train tracks buckle. Next to that, Russian Caravan smells like slightly insipid water.

Its most prominent flavour is actually a smoky taste and smell - in that sense, quite neatly capturing the world of the long journeys by which the tea originally made its way from Asia to Russia (hence the name). It has a taste & smell almost of Australian billy tea, tea made over an open fire while camping. The Twinings packet suggests drinking it with milk or lemon, but - as usual for me - I prefer it black. That way the full flavour is allowed out, and despite the distinctive aroma, Russian Caravan is actually not a overly flavoured tea. Actually, it's quite a smooth flavour, quite drinkable, even though I wouldn't choose to drink it every day for the rest of my life.

Very possibly, the chief asset of Russian Caravan tea is that it is almost peerless among teas in evoking the world from which it comes. I don't know how it's possible for a tea to be the beverage equivalent of a camel & caravan trip from Asia to deliver tea to the Russian aristocracy of the 19th century, but somehow it is. If all teas were as successful in that aim as Russian Caravan is, the world would be a better place...


* Less-kind descriptions have also been used.
Posted by jb at 12:01 PM