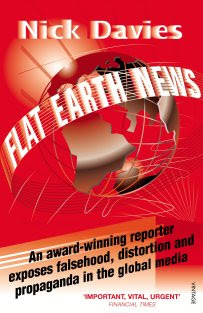 You can argue that a free, independent media is not of foremost importance to a democratic political system, but only if you want to be wrong. I may be biased (my Honours thesis was on the topic), but I find the topic endlessly interesting. Nick Davies has been in the news recently as the Guardian journalist who broke the News of the World phone-hacking story in the UK, but this book - published in 2008 - also caused quite a stir on its release.

Davies's basic argument in Flat Earth News is that modern journalism is, by & large, a mere shadow of what it should be. Rather than serving to investigate issues and hold the powerful to account, most (not all, Davies is eager to point out) modern journalism is sloppy, rushed, written by non-specialists and based (often unquestioningly) on sources with their own agendas.

Flat Earth News is filled with examples - Davies certainly didn't make any friends in the journalism industry here - and while it is largely British-based, both US & Australian journalists also come in for scrutiny. Beginning by tracking the Millennium Bug hysteria of the late 1990s (an entire industry based on extremely unlikely scenarios increasingly exaggerated by decreasingly expert sources), Davies then looks at the root cause of journalism's current malaise: the commercial imperatives of modern media owners.

Interested in running news media primarily (perhaps only) to make money, these owners are unwilling to spend the money and take the time that quality investigative journalism demands. Instead, they pare newsrooms down to the bare minimum while expecting ever-increasing quantities of content. One study Davies commissioned found that journalists are now expected to produce three times as many stories as they were a few decades ago. This is not conductive to long, detailed, thoughtful work, but rather to simply throwing together whatever comes in with minimal checking - write down what someone says, perhaps get a reaction quote from an opponent and publish: the axiom of 'More With Less' in action. (Here in Australia we see an example of this with the ABC - without any increase in budget, they've launched a 24-hr news channel on top of their existing services. And every mainstream commercial news source is much the same - decreasing the size of the staff without decreasing the quantity of news produced.)

Davies terms these workers 'churnalists', since the focus is on churning out as many stories as quickly and non-controversially as possible. This makes them particularly susceptible to PR firms, acting for governments, commercial interests or well-resourced lobby groups. These firms understand the pressures on churnalists and tailor their products accordingly, so that their clients' message can be published with as few changes as possible. Churnalists and their editors/owners are also eager to rock the established boat as little as they can, so stories are inevitably reported from the same angles time after time. Davies also takes into consideration the pressure on journalists to produce scoops and front-page (or digital equivalent) stories, thus leading to what he calls 'The Dark Arts' of journalists employing barely (or sometimes not-even-remotely) legal methods for gathering news information. This section, of course, is now overshadowed by the Murdoch press's phone hacking techniques, but even without those developments Davies points to some truly shocking lengths that journalists will go to in order to break a story, however trivial the issue may seem.

Flat Earth News concludes with three extended case studies drawn from British newspapers: the gradual decline of The Times' Insight investigative team, the surprisingly pro-war (in Iraq) stance of the notionally left-leaning Observer, and the barefaced lies & institutional bigotry of the Daily Mail. While the specifics of these cases may be less-familiar to non-British readers, the stories are compelling enough - and the parallels to other media organs elsewhere in the world obvious enough - for international readers to not get bored.

One of Davies's main criticisms of modern churnalism is one which has been rattling around in my mind for a while now, and he's articulated it well. The obsession with 'balance' in much journalism requires both sides of a story to presented as equal: here's something the PM said, so here's the Opposition Leader's response, and who cares which of them is more accurate? The cases on either side of the climate change debate are equal and therefore should be reported as such, and who cares if that makes the overwhelming scientific consensus of only the same importance as a tiny minority view?

The great blockbuster myth of modern journalism is objectivity, the idea that a good newspaper or broadcaster simply collects and reproduces the objective truth... In reality, what they generally promote is not objectivity at all. It's neutrality, which is a very different beast.